Many people enjoy modern plumbing because it eliminates waste, foul odors, and germs and bacteria that most would rather not have to deal with. However, it does come with numerous cons. The worst one is the sheer amount of water consumed by the toilet with each flush. Some studies determined a single household can use over 6,600 gallons of clean water per person each year.

An increased interest in environmentalism and the conservation of fresh, potable water has caused many to turn away from contemporary plumbing to seek more natural alternatives. One of the most popular is the compost toilet, which takes human waste and turns it into rich fertilizer to use around gardens and lawns. Some manufacturers create compost toilets that can be bought directly from a store or online retailer like Amazon. However, people don’t always want to spend money. In this case, individuals can opt for the DIY compost toilet.

How a Compost Toilet Works 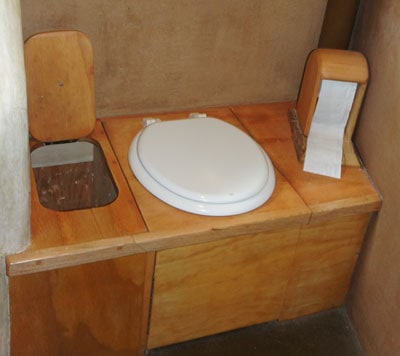 In a basic DIY compost toilet, the builder needs to leave space for multiple levels of decomposition. A DIY compost toilet, and even a regular one works by users layering a scoop of a material such as dried leaves, sawdust, or straw is layered on top of human waste. This replaces the standard flush of a modern toilet. The material is carbon-rich and helps decomposition while also neutralizing odors. Over time, the compostable material builds up but also wears down so that there are multiple levels of waste and carbon items like dried leaves at different levels of decomposition. Users of the compost toilet remove the last layer through a special bucket or drawer. The waste can then be buried in the yard away from edible plants and vegetables.

While buying a commercially made compost toilet sounds easier, building a DIY version is great because the user can add extra features or customizations. These DIY models can be as simple or complicated as the builder wants. The most basic version of a DIY compost toilet involves a five-gallon bucket and some sort of wooden container/seat. How does it work?

How to Build a DIY Compost Toilet 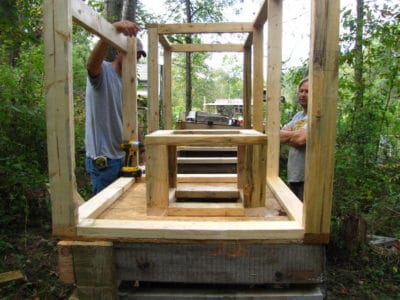 In this first model, builders need to get a reasonably sized bucket and flex their carpentry skills. The easiest thing to do is by some wooden boards from a nearby hardware store and cut them to form a three-dimensional rectangle. Some standard measurements for DIY toilets are to have a length of roughly 1 ft., a width of 3 ft., and a height of 1.5 ft: 12 x 36 x 18 sq. in. These boards should be sanded down to prevent splinters or slivers and can be finished with a sealant of the builder’s choice. However, before adding the finish, the builder needs to cut a hole in the top large enough for someone to use the bathroom into the bucket, which will be placed inside the wooden box.

To be more accommodating for the compost and users alike, a door or method of removing the bucket of compost is necessary. There are two main ways people do this. They either make the hole where waste enters large enough to remove the bucket, or they build a small door at the front to remove the waste.[1] Some people even leave out a panel entirely for easy access.

How to Combat Odors 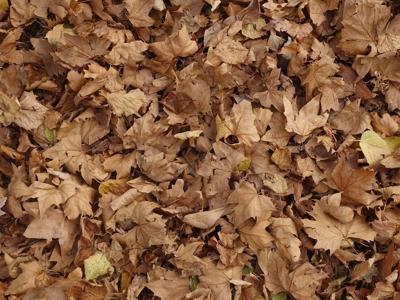 To combat the smell, users of the DIY compost toilet need to have a decomposable carbon-based material on hand to layer over the human waste inside the bucket. Again, the most common materials are dried leaves, sawdust, and straw. These aren’t products that tend to come from the store but can often be found out in the yard. Individuals who already compost outside will have an easier time getting their hands on items like dried leaves since they can be taken from the outdoor stash. Sawdust is typically the easiest material to find since some places like farming and hardware supply stores might sell bags of it. It can also be purchased online.

So, users of the DIY compost toilet need to keep some carbon material on hand to prevent odors. They could also rig up a basic fan system to eliminate smells if they don’t want to keep using sawdust, although this means decomposition might happen more slowly or odors might linger after use. However, setting up a fan will dry out the waste quicker, making it compost and degrade more easily.

To install a fan, many people who make a DIY compost toilet simply plug in a basic fan and point it towards the compost bucket from the interior of the wooden box hiding the waste. This is the least advanced method but also one of the weakest. For someone who wants something a little more effective, they will need to use their construction skills once more and start to add some modifications to the house as well as the toilet.

The best type of fan will require a length of PVC or plumbing pipe that is connected to the interior of the makeshift compost toilet’s box. This length of pipe needs to travel from the interior of the box, up to the house’s wall, and then out through the roof through a vent that will release foul odors. To encourage the air to move, builders can choose from several types of fans. Some are metal and will move on their own when the wind blows, encouraging the atmosphere inside the box to travel up the pipe and out. Other builders of DIY compost toilets, though, recommend using a small computer fan installed in the length of pipe to draw air up and out. These can cost between $100 and $200 but will save money in the long run.

A DIY compost toilet has many practical benefits for the environment and people’s wallets. Users save money on water, get a unique piece of furniture for their bathroom, and free compost to use as fertilizer throughout the garden. They can also help keep the environment healthy and use less clean water.

Now that you know how to build a DIY compost toilet, you can get all of the materials and supplies you need to begin your new composting adventure! For more information about composting toilets, check out this link. Good luck, and enjoy making your own supply of fertilizer!