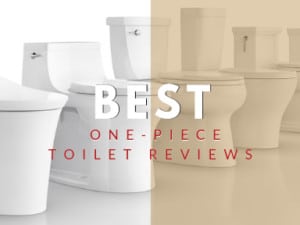 The sleek and modern appearance of one-piece toilets attracts many design-conscious buyers. If you’re looking for something that will complement a minimalist or modern bathroom interior, a one-piece toilet might be just what you need to tie the room together.

Additionally, many homeowners find one-piece toilets easier to clean, as they lack the nooks and crannies that occur in the design of their two-piece counterparts.

One-Piece vs Two-Piece Toilets: Which is Right for You

There are a number of one-piece toilets on the market today, but a few stood out to us during our research. When tracking down the best one-piece options, we looked at a few key features that would be important to any home owner.

We compared size, affordability, appearance, flushing power, structure and eco-friendliness to find our favorites. After scouring through reviews, blogs, and ratings, here are the best one-piece toilets. 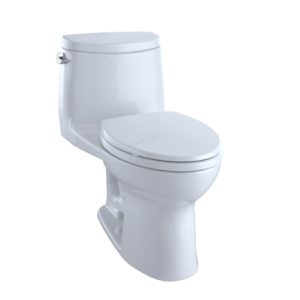 The Toto Ultramax is one of the most popular choices for one-piece models among consumer review blogs and Internet commenters alike. This second model is more or less the same internally, but with a quieter flush, slightly taller build and SoftClose seat.

The design of the Ultramax II is attractive yet low-profile, and users praise the solid construction. Many also noted the high flushing power, despite the fact that the Ultramax uses only 1.28 gallons per flush. They found that the Ultramax solved their clog problems, even in houses with older plumbing. As a result, many buyers ended up buying multiple units so they could replace all their fixtures.

The Toto Ultramax II manages to combine a high-powered flush with low water usage, making it an eco-friendly choice that doesn’t compromise on convenience. Toto’s double cyclone technology produces a quiet, even flush that leaves nothing behind.

Additionally, the high-quality SanaGloss technology and the seamless construction of the Ultramax helps it get clean and stay clean. The SoftClose seat is a neat bonus feature of the new model.

The Ultramax II also passes ADA regulations for height, meaning most adults will find it comfortable to use. With a seat height of 17.25” and a width of almost 17”, those who find standard toilets to be rough on their hamstrings, back or joints will no doubt find relief in the taller and wider build of the Ultramax.

Though there were few negative reviews from buyers who simply disliked the overall design, the chief complaint among users was the low flushing power. Several wrote that the weaker flush power meant they frequently needed to make a few flush attempts to make everything go down. That meant that in the end, it didn’t really save much water.

However, among the overwhelming majority of reviewers, there were many comments that said just the opposite. What could be behind this discrepancy?

It may be that these users have low water pressure in their households, which would undermine the flushing ability of any water-saving option. As the Ultramax is low-flow, it may not be the best choice for houses with water pressure issues.

One of the pros may turn into a con for some users–its ADA-compliant height might be a bit too tall for a shorter homeowners. Some shorter users said that it felt like perching on a barstool or a higher chair, which doesn’t make for comfortable business.

Some reviewers went on to mention that the original model of the Ultramax was shorter and more comfortable. The first model is still on the market, and can be found here. Note, however, that it is only ¾” shorter.

The good far outweighs the bad with the Toto Ultramax II. For most users, this will more than meet expectations. Easy to clean, comfortable, attractive and functional, the Ultramax fulfills all the requirements for one-piece toilet shoppers, making it our top choice. 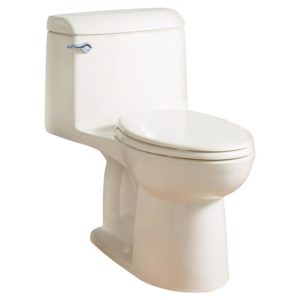 Hot on the heels of the Ultramax is our second pick, the American Standard Champion-4.

Don’t let the second place status turn you off from this model. Amazon’s best-selling one-piece toilet has a lot to offer, and for some users, the American Standard may indeed be the better choice. Only a few minor differences (addressed in the cons section) knocked this model down to second place.

Stylistically, this American Standard has a sleek but unassuming appearance. The Champion-4 is also ADA-compliant with a seat height of 15”. The glossy finish is both attractive and practical–the EverClean glaze on it makes for easier cleaning and prevents bacterial growth.

The American Standard Champion-4 shares many of the great qualities of the Ultramax II— easy to clean, easy on the eyes and comfortable to use—and it comes at a lower cost.

But the American Standard is set apart by sheer flushing power. American Standard produced an impressive video where, among other things, 18 golf balls, 38 rubber tubes, and 40 feet of bathroom tissue were flushed down the Champion-4’s drain with no problem.

Previous buyers said they flush was absolutely unchallenged by even the most unpleasant toilet situations. They didn’t have a single clog in over a year of use, and only had to make two flush attempts a couple times in a year. That’s pretty impressive for any primary toilet, especially in larger houses where there are lots of people using a unit.

We docked it a few points for a number of reasons. First, the American Standard had a higher percentage of negative reviews. Not tremendously higher, but still noteworthy: 10% one- and two-star reviews, versus Toto’s 7%.

Second, this American Standard model has a 1.6 gallon flush to the Toto’s 1.28. For some, this might be a benefit, as it contributes to the stronger flush of the Champion-6. And 1.6 isn’t bad—it’s certainly well outside the realm of older toilets with 3.2 gallons per flush.

But the Toto seems to perform more or less the same job, only with less water. All else being equal, the additional water cost will eventually negate the lower price of the American Standard.

It wasn’t easy to put the American Standard in second place. It’s a great model with a strong reputation, and buyers of this toilet will likely be happy with their purchase for many years to come.

There are a number of reason you might choose the Champion-4 over the Ultramax II. People of a shorter stature, households with low water pressure, or buyers with a smaller budget might find our second pick suits them better than the first. 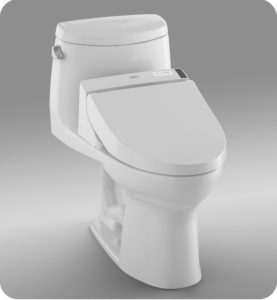 Our third place is somewhat of a “luxury” pick. The Toto Washlet might be out of many people’s budget for their toilet, but those willing to drop the cash will get what they pay for. One look at the Washlet will tell you that this is no ordinary toilet.

The design is compact and futuristic, with an elongated bowl and a seat height of 18 inches. It is constructed from vitreous china with a SanaGloss finish, giving the Washlet a clean white appearance that’s easy to maintain.

This toilet doesn’t just look futuristic. With a bidet, heated seat, automatic air deodorizer and auto open/close lid, the Washlet comes packed with every tech feature you didn’t know you wanted from a toilet.

Probably the most impressive feature of the Washlet is the touchless operation. All functions can be performed either automatically or via the accompanying remote control touchpad. When you walk toward the toilet, it lifts up its lid automatically, and it’ll close the lid when you walk away. The internal deodorizer gets to work all the while the lid is raised, so that the bathroom never gets stinky.

Like the other two toilets mentioned on this list, the Toto has a well-designed build that’s easy to maintain. It’s also an ADA-compliant height that will be comfortable for most users.

But the strongest draw for most will be the touchless operation, combined with all the amazing technology Toto managed to pack into this little unit.

There’s the heated seat, the front and back bidet, the automatic open/close, remote control operation, dual flush, and programmable settings for two people. You might be concerned that all this technology might break down over time, but users report that they’ve had no problems so far. Previous buyers said that after more than a year of daily use, everything was still working perfectly. They ended up buying more Washlets for other bathrooms.

Of course, with any technologically impressive product, the major turnoff will be the price tag ,which earns Toto this third place spot. Compared to its competition, the Toto Washlet is surprisingly affordable, but still more money that many wish to spend on their toilet.

The biggest complaint among users who have purchased the product appears to be the complexity of installation. Unless you’re a contractor yourself, you’ll probably have to hire one to put this toilet in.

Check out our guide: How to Install a One-Piece Toilet

This little technological marvel is well worth the money—if you have the money to spend. With all the integrated features, you may never go back to traditional toilets again. Buyers said that while some houseguests laughed at the design at first, they were quickly won over by how easy and effective the design is.

When considering the purchase of a one-piece toilet model online, probably the most important factor will be the dimensions of the toilet itself. It’s important to find the toilet that fits your space as well as your height.

After all, what’s the point of buying a toilet if it’s too big for your bathroom or too big or small for comfort?

Maintenance is also a chief concern for many consumers. This isn’t limited to the plumbing within the toilet, although that’s also important.

But most of the upkeep you will do personally will be cleaning, so it’s important to look at what measures the company has taken to ensure your unit will stay clean. An advanced finish like Toto’s SanaGloss or American Standard’s EverGlaze can make the cleaning process a breeze.

Certainly all the toilets we’ve recommended here are worth consideration. Ultimately, the model you choose should be based on your personal needs, wants and aesthetic preferences.

Shorter individuals, those on a budget, or those with low household water pressure might elect to buy the American Standard Champion-4. This slightly smaller, less expensive toilet may use slightly more water per flush, but owners will no doubt enjoy more good than bad with this model. 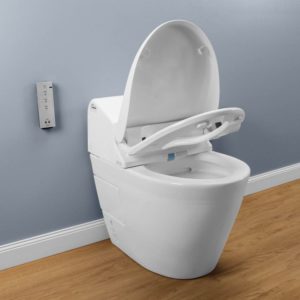 Those who are looking for a futuristic, luxurious and exciting model can find it in the Toto Washlet with Integrated Toilet C200. Though it may be out of many people’s budgets, those who have used the Washlet swear they will never go back.

If you’re simply on the hunt for a high-quality one-piece toilet with impressive flushing power, great design, and long-lasting quality, we recommend the Toto Ultramax II.

We’ve taken everything into account and decided our best one piece toilet has to be the Toto Ultramax II thanks to its great value and stylish design.

Looking for even better household toilets for conserving water? Check out our dual flush model recommendations or our low-flow toilets. If you’re interested in dramatically reducing or eliminating your eco-footprint entirely, head over to our composting toilet reviews or visit our Best Toilet Reviews!