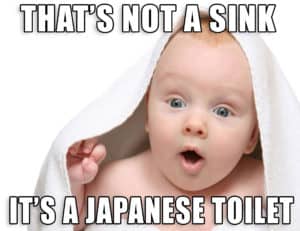 If you watch or read the news regularly, you’re almost guaranteed to have heard the hype about Japanese toilets. And anyone who has friends who’ve travelled to Asia will almost certainly have heard about the high-tech wonders in restrooms abroad. They’re always a source of endless anecdotes for returning tourists and travelers!

We thought we’d give you a little primer on how Japanese toilets differ from those in the West (especially America), and why they’re catching on around the world. As you see more and more models available here, it’s worth explaining why some Japanese people will happily spend several grand on a throne while we in the States would grudgingly spend $500 max.

Historically, there have been two types of toilet used in Japan.

The first, and the older, is the common Asian squat-style toilet. Rather than a raised seat and bowl like we use in the West, toilets in many Asian countries are sunk troughs cut into the floor. To use them, you either urinate standing (for men) or squat to defecate (or, if you’re a woman, urinate). These are still common in many public restrooms across Japan and other Asian countries. They’re popular because they’re incredibly simple to produce and install, and they use relatively little water. However, they aren’t exactly pleasant to use.

More common these days is what the Japanese refer to as the “Western-style” or raised toilet design. These were relatively uncommon in Japan until the 1980’s, when the Toto company combined a seated toilet design with a high-tech twist on the European bidet. These integrated bidet/toilets, branded “Washlet” by the Toto company, have caught on like crazy across the country, to the extent that 80% of Japanese households now use them! In fact, they’re more ubiquitous than computers in that country.

What makes them so distinctive? The Washlet design has an integrated bidet function for washing your nether regions. While those were common as separate sinks in Europe, the Toto design was the first to put the bidet right in the toilet. So, after you use one of these loos, a nozzle under the seat sprays your bits clean, using a jet of warm water (though these days you can pick a pressure, temperature, and even angle). No toilet paper, no mess, no fuss! And the nozzle even cleans itself before and after each spray. It’s incredibly sanitary, doing a much better job cleaning you up than you could ever do with toilet paper. Plus, it’s a luxurious experience that once you try you never want to give up. 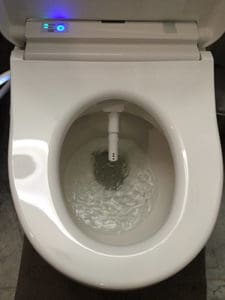 The integrated bidet was just the first feature to be introduced, though. Since the first Washlet, Toto’s toilets have added all manner of other conveniences. Successive models introduced seat heaters, “decency” noises to mask the sounds you make on the loo, and all sorts of adjustable settings for the bidet. They even incorporate blow-dry functions!

Competing brands also innovate and come up with their own range of gadget-y features, like odor reduction, automatic sensors, and more.

Toilets today are so elaborate that the Japanese had to get all the manufacturers to agree to a universal symbol alphabet, just so that people could use the bathroom without getting confused! Before, all the symbols were in Kanji, and each brand used their own markings, so even Japanese got overwhelmed, not to mention tourists from abroad. 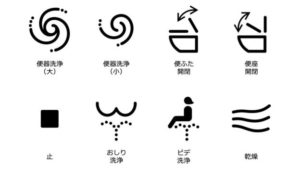 Lest you think this is some sort of unnecessary, over-engineered gimmick, we should clarify that there are some concrete benefits to the Japanese way of doing “business.”

For one thing, it’s much more sanitary. The bidet nozzle does a better job cleaning your underside than you ever could, and the whole toilet gets a cleaning at the same time. So, Japanese toilets don’t get dirty to the same degree or at the same rate that American models do. You wouldn’t wash your hands by just wiping them on a dry paper towel, or “shower” by just wiping a dry towel across your body. This all makes a lot of sense, when you think about it

They also turn going to the bathroom into a pleasant and relaxing experience. No huddling on cold seats, or pain from having to wipe endlessly to clean up. It’s like a short little spa visit that you’ll look forward to, rather than dread or rush through.

No toilet paper is used, either. You can certainly use a bit if you like, but you definitely don’t need it. Considering that Americans use 8 million tons per year, the environment stands to benefit a lot from all of us switching to the Japanese method.

Check out this guide: How To Use Japanese Toilets

The Washlet design is great for the elderly and handicapped, too. The bidet function means they don’t need to be able to reach around and clean themselves, and having so many automatic features makes the whole experience so much more accessible than even ADA-certified products here.

Today, if you visit Japan, you’re likely to see a toilet “greet” you automatically by raising its lid and turning on the control panel. You’ll see a full control panel with as many as a dozen buttons, and often you’ll hear a gentle rushing water sound or music when you sit. That’s the sound of the Otohime, which translates into English as “The Sound Princess”. It offers a range of coverup noises for your dignity. The bowl automatically flushes, and the lid automatically closes. It doesn’t get better than that!

What to read next?: Japanese Toilets 101

Check out all the latest Japanese toilet tech in this fun video from NPR:

For more product recommendations, you can visit this link.