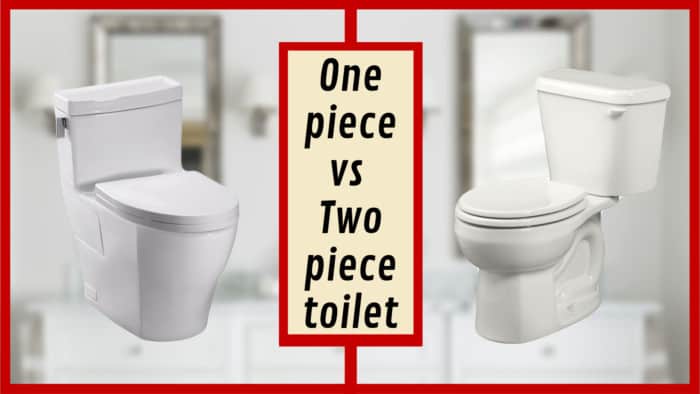 There are any number of features and factors to consider when you shop for a new toilet. Do you want a white fixture, or something off-white? What about the flow rate? The seat height? The list goes on and on.

The biggest decision you’ll have to make up front is whether you want a one-piece or two-piece toilet. That’s the easiest way to narrow down your options and start figuring out which specific model to install.

We receive quite a few questions about the differences between the two, so we wanted to put together this little buying guide for shoppers puzzling over which to choose!

Sometimes, it’s best to start with following the money. One-piece toilets are more expensive than two-piece toilets. That’s true in any price class, size, or water usage category. They’re costlier to manufacture, and that definitely gets passed along to consumers.

You’ll also find that you need professional installation for a one-piece toilet, where two-piece toilets are relatively easy to DIY. That’s because they’re so darn large that it’s more than worth the extra cash to have a team of capable hands get it inside and set up.

On the other hand, there are lots of reasons why you might be more than willing to pay a bit extra for a one-piece model!

They’re easier to clean, for one thing. Since there’s less surface area, fewer awkward areas, and fewer joints (the usual collection points for grime), you can really cut down on your cleaning time in the bathroom.

You eliminate the portion under the tank, behind the seat, which is (personally speaking) our least favorite to clean. Since the surface all slopes cleanly up to the tank lid, you can just wipe across, rather than having to get your fingers into tight cracks and crevices full of gunk.

They look sleeker, too. When you sit and think about it, you’ll realize there’s no particular reason why you’d want to look at all those bolts, pipes, and covers that you see on a two-piece toilet. They clutter things up, attract filth, and serve no purpose. Whether you’re going for a more minimalist look or just trying to simplify your aesthetic, a one-piece toilet helps a lot.

We also find that one-piece toilets fit better in smaller spaces, from both a practical and aesthetic perspective. The tanks are lower-profile, and since the whole thing seems to sprout naturally out of the floor, it doesn’t give the eye so many places to land. You can also get these in wall-mounted formats, if you want to save lots of space!

One-piece models are easier to install and maintain in some ways, though you need more hands and have a heavier object to deal with. They have fewer connection points and components, so there’s less to do after you get it lowered into place. They also include everything you need in the box (like a seat and a wax ring), while that’s not true of many two-piece options.

Long term, there won’t be any possibility of leaks between tank and bowl, and since there’s no need to connect two components, the porcelain is obviously not going to crack when you install as easily. That can sometimes happen when you attach a tank to a bowl. Also, because there are fewer exposed connections and components, you won’t have to worry about pipe issues from excess moisture, and so forth.

Two-piece toilets are cheaper than one-piece models, plain and simple. That’s the primary reason most people still buy them today. They can cost quite a lot less at the checkout, and they’re pretty easy for a capable home plumber to install without professional help. So, you could be looking at saving several hundred dollars by going old-school with a two-piece model.

These models also have a more traditional look than one-piece options. Since one-piece toilets are relatively new on the market, they strike a modern look. We don’t associate them visually with traditional or period decor. So, if you’re trying to go for a more classic look in your bathroom, that may be a factor to consider.

They’re no worse in terms of performance, either. You could certainly run into trouble with leaks along the way, but a two-piece toilet will flush just as well as a one-piece unit, and there’s no real difference in functionality.

They’re also cheaper to repair, since you can get all the components separately. If something goes on a one-piece model, you’ll often have to replace the whole thing. Two-piece models are more modular by definition, so they can easily be patched up and made to work longer.

You can probably tell from the amount of time we’ve spent describing each category that we prefer one-piece toilets. As people who aren’t that keen on cleaning toilets, the benefits of going unibody speak for themselves. You can see all our favorite one-piece options here!

However, if you don’t like the look, or need to be frugal, you shouldn’t feel bad about purchasing a two-piece model. They’re perfectly good, and we still recommend quite a few models on this site. Head to our home page to see a few good two-piece options!