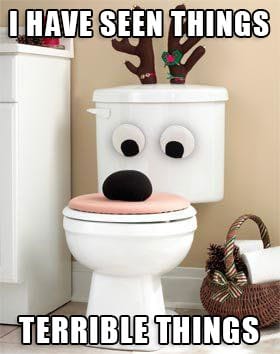 Contrary to what a lot of Americans like to think, the rest of the world doesn’t all behave like us! Especially if you don’t travel abroad frequently, you may be surprised to learn that the seated toilets we’re all familiar with aren’t actually common in many parts of the world.

So, in honor of the newly-designated World Toilet Day, we wanted to take you on a tour of the world by way of toilets! There are a range of different designs and formats in use today, and we’ve got some visuals to help out.

You can also see photos of toilets in 45 different countries here:

Half of the world’s population does not have access to a toilet today. That’s a pretty sobering statistic, and the majority of us don’t realize that 1 billion people live without toilets at home, at work, or at school.

Still worse, 15% of people across the world defecate completely out in the open. They don’t even have a basic pit toilet or outhouse to use. They simply squat in a field, in a gutter, or in a river. Defecation like this contaminates water supplies like crazy, and it makes transmission of diseases and parasites rampant.

The World Health Organization estimates that 280,000 people die each year from diarrhea-related conditions brought on by lack of sanitation. Cholera, typhoid and polio are among the most common, but countless parasites and infectious diseases thrive in places where excrement is not properly dealt with.

2.4 billion people were estimated to lack basic sanitation facilities in 2015, and progress has been very slow to fix this. In India, one of the government’s biggest agenda items is to provide the entire country with toilet access. It’s scheduled for 2019, but even that is an ambitious target. 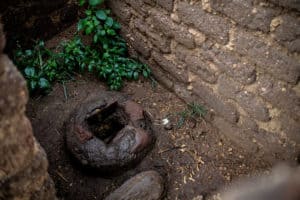 The next step up from defecating completely in the open is the use of pit toilets, which are common in many developing and undeveloped countries. Pit toilets consist of a dug pit, over which people squat and defecate. While they are in some ways better than defecating out in the open, there are still countless issues with this practice.

Pit toilets are often unlined, so excrement leaches out into surrounding soil and water. There’s still a lack of sanitation, and an extremely high rate of health issues from it. 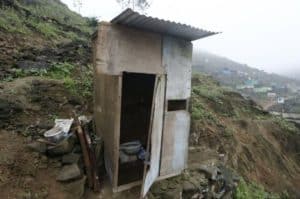 Outhouses are usually a contained version of pit toilets, which offers some protection, especially to women. In pit and open situations, women are very vulnerable, especially in developing countries. Many are attacked en route to the toilet facilities, if they exist, or in the open when they are squatting. So, outhouses are certainly a step up from pit toilets, if still inadequate.

While we in the States think of outhouses as something to be used when camping or farming, they’re considered an upgrade for many. For example, 40% of Guatemalans use one of these instead of a flushing toilet.

Unless they are built and maintained properly, outhouses do little to reduce disease and parasite transmission compared to open/pit toilets.

Squat toilets are a type of flushing toilet, so they’re the biggest jump from the kind of pit or collection chamber system used for pit and outhouse toilets. Squat toilets are essentially a floor-level version of what we use in the West. They’re common across most Asian countries, and the Subcontinent.

To use a squat toilet, you squat over the trough, which is indented into the floor. When you’re done, you can usually flush in the same way that you would with a seated/Western-style toilet.

Squat toilets are roughly as sanitary as seated toilets, provided that they flush properly and are cleaned thoroughly. The real difference is in comfort: most Westerners, and increasing numbers of Asians, would rather sit while using the facilities. Still, these are the standard for most public facilities in the East.

Fun fact: in many countries, such as in China, public toilet stalls don’t actually have front doors! So, you have some privacy from your neighbors, but not from anyone entering the restroom.

Don’t count on finding toilet paper in every stall, either! Many countries, especially in Asia, have longstanding cultural practices of people bringing a roll of their own paper around to use in public facilities. 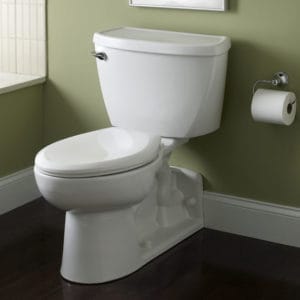 The seated, raised toilets we’re used to in America are the most common across the developed world, particularly in the West. They’ve been used for hundreds of years here, and they’re usually considered to be the most sanitary format. Having waste contained in a water-filled bowl reduces odor and airborne bacteria, and the seat makes these thrones quite comfortable.

Travel tip: they’re not always free! We’re pretty spoiled in the US, having free public toilets practically everywhere. In Europe, most public toilets are pay-per-use and have attendants. At London’s Victoria Station, the public loos make over a million dollars per year!

You’d also be surprised to find that many Western-style toilets don’t have their own flushing mechanisms built in. Mainly in developing countries, you’ll use a bucket of water to “flush” them after each use. 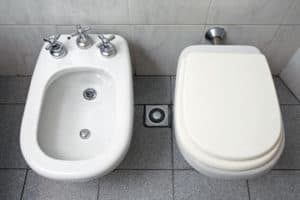 Bidets are a sort of bath/sink for washing one’s undercarriage, so to speak. They’re quite popular in Europe and Japan. Bidets eliminate the need to use toilet paper, and are considered by many to be more sanitary than wiping. However, they’re still fairly rare in the States.

In Europe, bidets are usually separate from toilets. In Japan, they’re integrated into the toilet itself! There’s a nozzle under the seat, which hoses down your nether regions after you’ve done your business. Bidet seats are slowly making waves here, since they’re an easy way to upgrade an American toilet to the Japanese system. 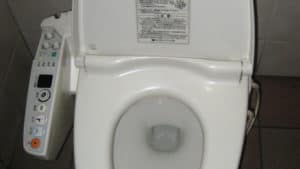 Finally, smart toilets are all the rage in Japan and the surrounding countries. These are essentially more elaborate versions of the bidet/toilet combos pioneered by the Toto company. More than 3/4 of Japanese households have them! Smart toilets, also called washlets, usually have a heated seat, bidet nozzle, air dryer, and lots of adjustable or automatic features.

Travel tip: bring sanitizer abroad! In many countries, public restrooms don’t have sinks for washing up after using the toilet.

For more toilet know-how and up-to-date reviews of current models, head to this page!